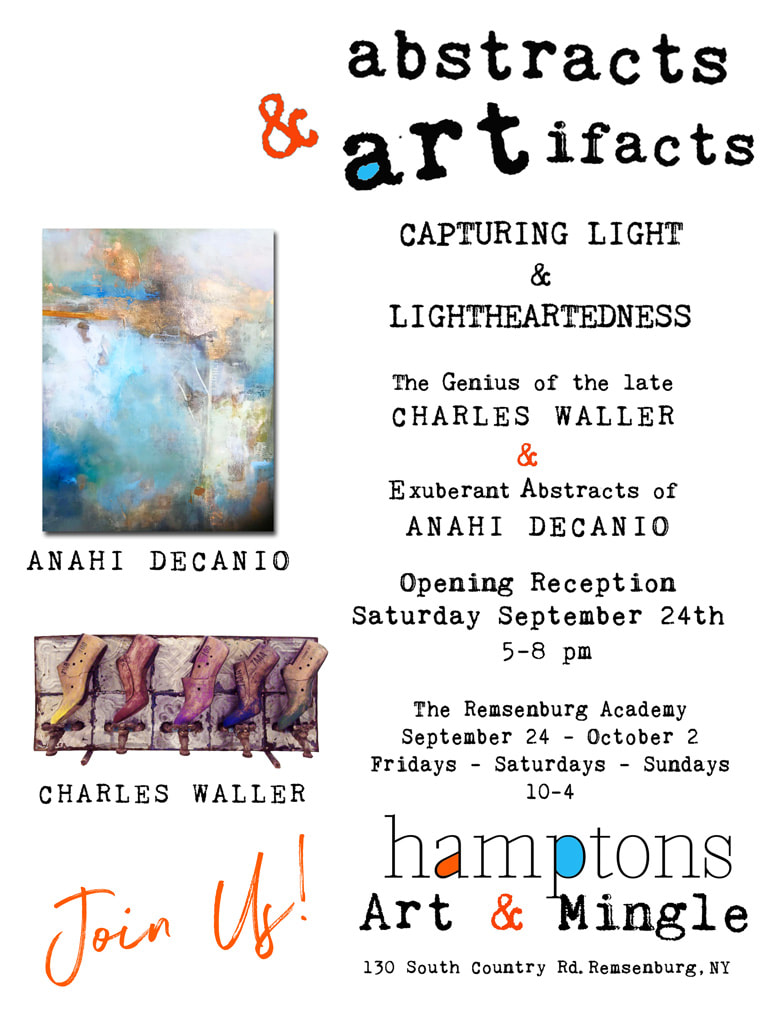 ABSTRACTS & ARTIFACTS:
​Capturing Light and Lightheartedness in the works of Anahi DeCanio and Charles Waller

​​
​ABSTRACS & ARTIFACTS: Capturing Light and Lightheartedness.
Hamptons Art & Mingle
​
Anahi DeCanio abstract paintings and a collection of art in different media from the late Charles Waller will be exhibited at The Remsenburg Academy. The juxtaposition of the divergent styles will be a play in contrast and balance. The artists exhibited together in group shows for over 10 years and spoke often of having a two person show.  This exhibit honors those conversations celebrating Joie de Vivre!

Anahi DeCanio is an award-winning, multi-disciplinary artist. Inspiration from urban vibrancy, the beach or Zen landscapes, her abstracts are rooted in evoking a positive emotional connection to the work and the space it inhabits. Her work is represented by several galleries and is part of private and corporate collections in the US and abroad. Venues include The Boca Raton Museum of Art, Brown University, the Palm Beach Armory, Art Basel, Miami, National Steinbeck Museum, Guild Hall among others. Solo exhibits of note include the White House Fellows Conference in the fall of 2016 and the Consulate General of Uruguay in New York city. Design focused exhibits include collaborations with luxury designer Naula at the Architectural Design Show and various charity design show houses. Anahi’s work can be seen in several motion picture and TV sets. Press highlights include the New York Times, Robb Report, Time, Palm Beach Post, and Mansion Global and several Hamptons publications. She is the founder of eARThHamptons and  creative director of ArtyZen Home.  Her work is on exhibit at Luminary in NYC and an art event featuring new work is scheduled to open on October 19th of this year.

Charles Waller​ was an award winning well respected artist and beloved fixture of the Hamptons art scene.  In his early career as an illustrator Mr. Waller did drawings for The New York Times, The Boston Globe, Time and Esquire Magazines as well as other large corporate clients, including Citibank and American Express.  His body of work was often inspired by treasures from antique treasures found on his travels from around the world. Found Objects, his brilliant meticulous illustrations and his signature wit were reconfigured into well-crafted visually impactful works of art commenting on the human experience.  He studied English literature and psychology at the University of London and illustration at the Royal College of Art eventually graduating with a bachelor of fine arts with honors from Rhode Island School of Design. Mr. Waller's work appeared in numerous group and solo shows on the East End in addition to galleries in Manhattan, London, Japan, and Santa Fe. Collectors of his work included the late Alfred Hitchcock and Kirk Douglas. Ronald Reagan was presented with a drawing by Mr. Waller done for Time. His work is also in the collections of the Parrish Art Museum, Guild Hall, Micro Museum in Brooklyn, and the Dai-Nippon Gallery in Tokyo.  Publications include The New York Times, The East Hampton Star, HC&G, Hamptons Magazine, Dan’s Papers and The Sag Harbor Express.  Mr. Waller's artwork is being curated by Geralyne Lewandowski founder of ArtGroove.